Below is 2016 Western Washington Real Estate updated information pulled directly from the NWMLS and WA Realtors. Our Multiple Listing Service covers most of Western WA and some of Central WA. While there are specifics of certain counties, it’s best to remember the upward trends are amplified in King County and even more in Seattle proper. References to last year’s market trends indicate that 2015 was considered a record year and this year has a more dramatic inventory shortage than one year ago. Given this year we have even more people moving to our region with great jobs, the lack of homes for sale is increasingly pinching the available inventory. While there are apartments, condos, townhomes and single-family homes being built all over the region, growth is outpacing new construction. In short 2016 will still be a good time to buy (and the sooner the better) and the end of the climbing market price isn’t in even in sight yet. This is a great time for sellers to receive a record price on the sale of their homes. 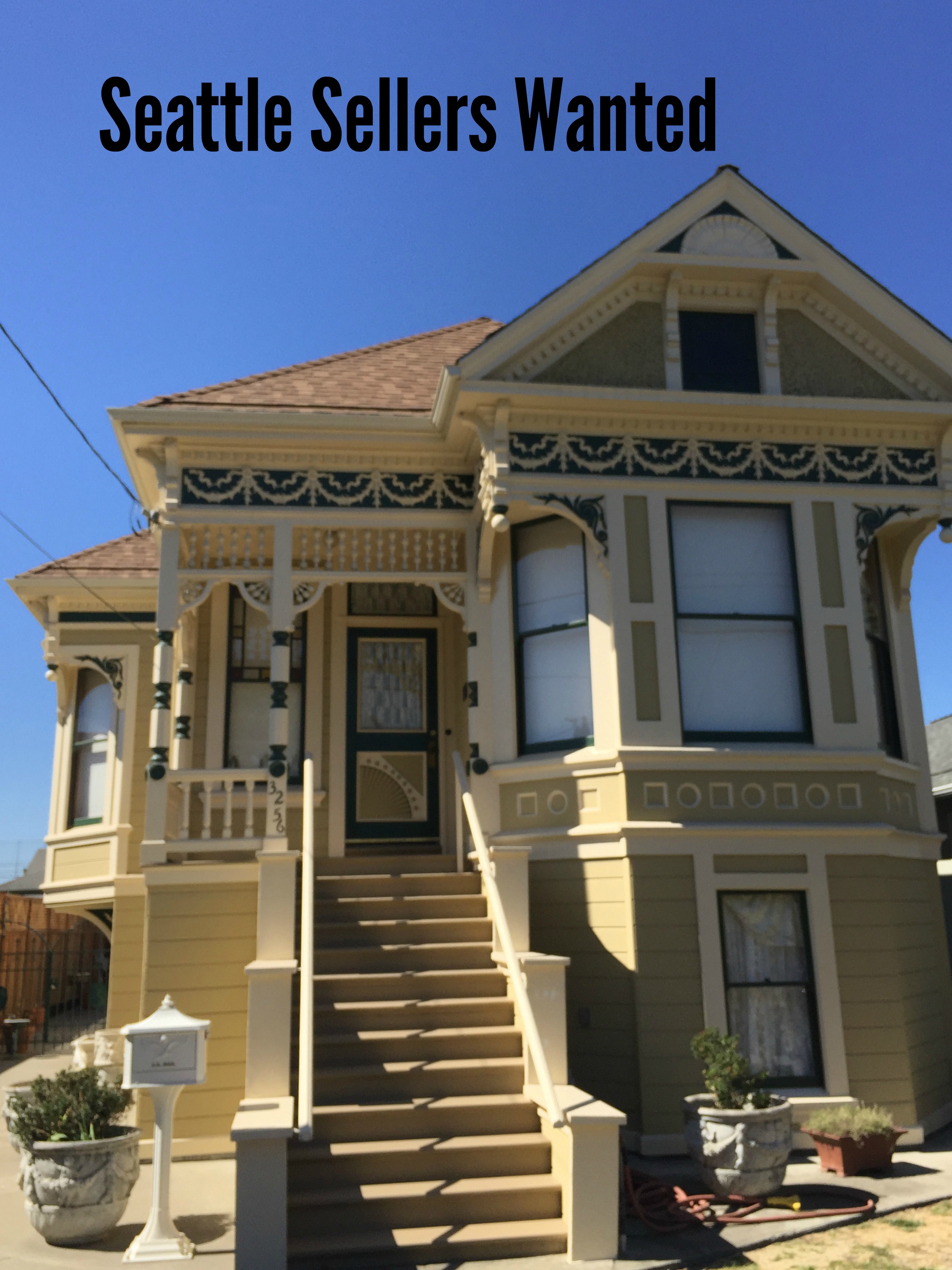 “KIRKLAND, Washington (February 4, 2016) – Depleted inventory is contributing to “overwhelming” traffic at open houses, shifts in strategies for both buyers and sellers, and escalating prices, according to officials with the Northwest Multiple Listing Service.

Dick Beeson, a former chairman of the MLS board, said the lack of inventory in almost every county is, “without question, a 2016 game changer.” He described traffic at open houses as sometimes simply overwhelming. “There haven’t been any battle royals on the premises, but it could happen any day now,” quipped Beeson, the principal managing broker at RE/MAX Professionals in Tacoma.

The latest figures show a drop of nearly 28 percent in the number of active listings in the MLS database compared to a year ago. Members added 6,670 new listings during the month across 23 counties in the MLS service area. That’s down nearly 4.6 percent from twelve months ago. At month end, members reported 12,357 active listings, which compares to 17,082 at the end of January 2015.

Condo inventory (excluding single family homes) fell sharply, from 1,793 active listings a year ago to last month’s total of 1,145 at month end, a plunge of 36 percent. In King County, the inventory of condos dropped 42 percent.

For the area overall, there is just 1.7 months of condo inventory, with Snohomish County reporting the tightest supply (1.1 months) followed by King County (1.2 months).

The inventory shortage took a toll on last month’s sales. The number of pending sales (mutually accepted offers) fell about 5.3 percent area-wide during January, although half the counties in the report tallied increases compared to a year ago. The 5.3 percent drop marked the first negative change in year-over-year comparisons since April 2014.

Member brokers reported 7,253 pending sales last month, down from 7,658 for the same month a year ago. Despite January’s downturn, industry leaders remain upbeat.

“Only three other Januarys since 2000 had more homes go under contract in the four-county region area of King, Snohomish, Pierce and Kitsap counties,” noted Mike Grady, president and COO of Coldwell Banker Bain. “This, in the face of stock market scares, shows the viability of real estate as the better investment for both homeowners and investors,” he suggested.

Other industry leaders agreed. “We’re selling virtually all new listings, many with multiple offers in all the market areas of King, Snohomish, Pierce and Kitsap counties in the price range where 90 percent of the sales activity is happening,” said J. Lennox Scott, chairman and CEO of John L. Scott.

Scott also said his analysis of the number of homes selling in the first 30 days is double what a normal, healthy market would look like.

“The Greater Seattle area housing market remains out of equilibrium,” stated OB Jacobi, president of Windermere Real Estate. He said sales will continue to suffer at the current pace of transactions without adding new inventory. “At the same time, prices will continue to appreciate and could outperform our expectations if inventory levels and mortgage rates remain at current levels.”

MLS director Frank Wilson said the Kitsap County market is “taking off again right out of the gate,” adding, “We are seeing an increase in open house activity as well as more multiple offer situations.”

Wilson said Kitsap County, where there is only 2.4 months of inventory, is “deep into a seller’s market.” He expects the market will become more unbalanced throughout the first half of 2016. “First-time home buyers are probably being hit the hardest in this type of market,” observed Wilson, the branch managing broker at John L. Scott’s Poulsbo office. In general, he said financial resources are thin for this segment, their confidence is low, and the types of loans they use are often not as favorable.

A strong fourth quarter in 2015 is reflected in January’s closed sales of single family homes and condos (combined), which rose 11.6 percent from a year ago. Members reported 4,985 completed transactions; a year ago, they tallied 4,467 closings. The year-over-year median price on these sales increased 7.5 percent, rising from $279,000 to $300,000. Ten counties reported double-digit gains.

Single family home prices (excluding condos) jumped 7.6 percent from a year ago for the area overall. For the four-county Puget Sound region, the median price for a single family home rose 12 percent, from $325,000 a year ago to last month’s figure of $363,975. Snohomish County reported the largest increase at 16.6 percent. A comparison of prices by county shows King County tops the chart with a median sales price of $490,970, up 11.2 percent from a year ago.

Rapidly rising prices and low inventory are worrisome, according to some brokers.

“A true conundrum exists,” said George Moorhead, designated broker at Bentley Properties. “For sellers there is no better time in history, but the concern we hear is there’s no place to move.” He said since most sellers are looking to move up to larger homes, the ripple effect is “more like a tidal wave as it rolls back to the first-time buyers in the market who are quickly getting priced out of the possibility of purchasing a home.”

Moorhead, a member of the Northwest MLS board of directors, reported doing a recent search of homes for sale in Bellevue with asking prices between $500,000 and $800,000. That search yielded only about a dozen properties in the database, a result he described as “staggering” and well below the norm.

Despite such challenges and complaints by buyers, Moorhead said buyers are still presenting offers that are very aggressive.

The increasingly competitive market is prompting hesitation among some would-be sellers, reported Bobbie Chipman, principal managing broker at John L. Scott in Puyallup. She said potential sellers are expressing reluctance to list their existing home prior to finding a home to move into due to limited inventory.

“A strong strategy is for sellers to list their home, sell and close, and move into temporary housing,” suggested Chipman, one of the MLS directors. “This approach allows offers to be written that are not conditioned upon their sale closing, and it strengthens their position as a buyer,” she explained.

Echoing the notion of being flexible, Frank Wilson said a seller’s decision to accept an offer does not come down to sales price alone. “Type of loan, lender, closing time, amount of earnest money, and other concessions like closing costs and offer price all play into a seller’s decision,” he stated. “On top of that, a seller can choose any offer for any reason, even a lower price offer if other variables are favorable. Escalation clauses, back-up offers and finding funds or a bridge loan are all tools that buyers will need to employ to be successful in today’s market.”

Northwest Multiple Listing Service, owned by its member real estate firms, is the largest full-service MLS in the Northwest. Its membership of nearly 2,100 member offices includes more than 25,000 real estate professionals. The organization, based in Kirkland, Wash., currently serves 23 counties in Washington state.”

Today’s Real Estate market requires the attention of a full-time agent, to best position your offer to purchase in a multiple offer environment. I have been successful at keeping my clients out of bidding wars and having their first offers accepted. I’d love to have the opportunity to do the same for you.

You can reach me at:

I have a proven record of garnering multiple offers while marketing homes for sale. To receive the best offers takes a little more time for careful presentation but the sellers are handsomely rewarded for their patience.

You can reach me at: